I was tagged by the wonderful Nia from Wonderlands Angels to do the Shuffle The Music Tag. I’ve never done anything like this on my blog before, but I thought it would be a great opportunity for you to see what sort of music I listen to! So basically how it works is I hit shuffle on my library and for the first 15 songs that come up, I list them and tell you a bit about them. So, let’s get into it…*prepares to be exposed as an emo nerd*

So first up we have Vacant Throne by Bury Tomorrow. It’s a really cool song and I love the concept, and the chorus is just awesome, which is the case with most of their songs tbh. I was never really into metal bands before Rory (the bf), and Bury Tomorrow is actually his favourite band, so I surprised him with tickets to go see them with our friend Jake and started to learn their songs so I could enjoy it as well. I ended up really getting into them, and the concert was so so good (I also loved Crossfaith who were supporting them, they were unreal and some top pits occurred), but yeah so that’s that!

2. One Hundred Sleepless Nights by Pierce The Veil

This next one is by Pierce The Veil, a band who will always hold a place in my little emo heart. Collide With The Sky is still to this day one of the best albums I’ve ever listened to, as the way it all flows together and the feeling behind it is quality. I don’t recommend/rate their most recent album; I’ve seen them twice a couple years back and they were great live, just watch out for their fangirls because yikes.

3. Dancing in the Dark by Imagine Dragons

Now I absolutely loved the new Imagine Dragons album (Evolve), as they’re another band that hold a massive space in my heart. I’ve liked them from the start and I’ve seen them three times. They’re always amazing and unforgettable, and they’re one of those bands where if you think you don’t like a song, they’ll prove you wrong every single time when you see it live. Dancing In The Dark is probably my least favourite song off of Evolve, but I don’t dislike it as it’s a nice chill end to the album.

4. Four Walls (The Ballad of Perry Smith) by Bastille

Bloody hell it’s like throwback-to-my-favourite-bands-ever-central today! Bastille are a band I can 100% confidently say that I was absolutely obsessed with. I know every word of every album and I don’t dislike a single one of them bc I just think that the writing and vocals are amazing. Four Walls isn’t my favourite song from the new album (Wild World), but the beat is really cool and the lyrics are really interesting, and their concepts are always so well done. Like Imagine Dragons, they’re unreal live (I’ve seen them twice); they’re one of those bands where (like with the Collide With The Skyalbum) you forget about them and then you rediscover them and fall in love all over again.

One of my more recent obsessions, Creeper is a band that any emo 100% needs in their life. Their music is so unique and it’s like everything you never knew you needed until they popped up. I first saw them supporting Neck Deep (and again), and then at Slam Dunk, then at Leeds Fest, and each time they made it their own. They’re one of those bands where no matter how long the set is or whoever they’re supporting, you’re in their world for as long as they perform. Their lyrics are so clever and dark but also positive, and just all-round amazing. Black Mass is such a top song to dance around to, and it’s super catchy and easy to learn. I’ve met them once and they’re just so down to earth and nice. Plus their fanbase is called Creeper Cult, and you can’t get much cooler than that imo (and their mosh pits are top quality). 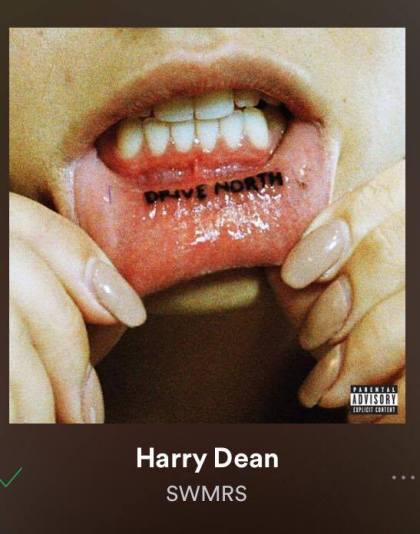 If you like pop punk and you’re looking for something a bit more upbeat, then SWMRSare your lads. I’d call their music upbeat pop punk, and Harry Dean even has a bit of loose screaming in it if you like your pop punk a bit more punky. It’s just a great song to dance around to, and it’s gritty but without the heavy emotions lel. Palm Trees and Turn Upare probably my favourite SWMRS songs.

This next one is kpop (yup), but I’m not even apologetic tbh – it’s a guilty pleasure but without the guilt. When the emo life gets too much, I’m always drawn back to kpop. I used to be super into it (especially EXO) a few years ago and I recently rediscovered it (but my relationship with it is much less intense). I just think that the music is so unique and upbeat, plus some of the rapping is top quality. It’s a nice break chill break from emo lyrics when your mental health is even too shit to wallow in your inner emo, and I’m 100% on board with it tbh. Monster, Diamondand Dancing Kingare my current fav EXOsongs if you feel the need to delve in haha. 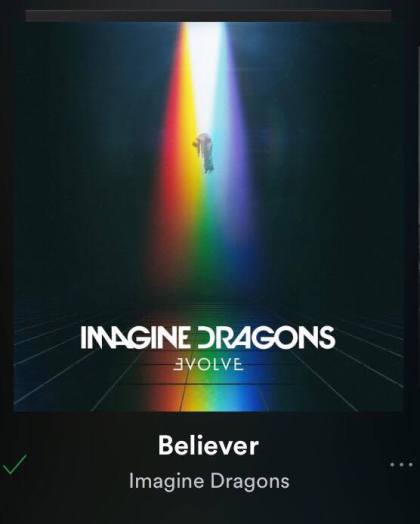 Here we are again with Imagine Dragons! Believer is one of my favourite songs from the new album as it’s just so motivational and amazing. It’s such a feel-good song and I can’t wait for the opportunity to see it live.

Now I wouldn’t be a proper emo if an MCRsong didn’t come up, would I? This isn’t my fav song by them, and even though it’s one of their more popular songs it’s always a banger. My fav by them would have to be one of the songs off of The Black Paradelike Sleep or Famous Last Words, which is an album that sounds amazing on vinyl btw (thanks Rory for that amazing birthday present tht shook me to my emo core).

10. Of Glory by Bury Tomorrow

Another Bury Tomorrowsong ayyy! This is actually a really fun throwback to them as I haven’t listened to them in a while. Of Gloryis such an atmospheric song and I love the guitars in it. The chorus is super dramatic, and while it’s not my fav song by them (Man On Fireis my fav without a doubt), the bridge is really dramatic and I love it.

11. Things We Leave Behind by Trash Boat

I’m gonna start off by saying that Trash Boat is a sick band and their album (Nothing I Write You) is amazing. Things We Leave Behind is not my favourite song off the album as it’s a bit more tame than the others, but I’m a sucker for symbolism and it cuts off just before finishing the last word and the effect of that is pretty cool. The lyrics of all of their songs are all so well-written, and they have their own unique style. My favourite songs by them are Brave Face and Gnarmalade.

12. Mama by My Chemical Romance

This is an absolute banger my god what a throwback. It’s so atmospheric and the backing is mental but the whole song just comes together so well. If you haven’t heard this are you even an emo at this point pls. It’s without a doubt one of their best songs, and it sounds killer on vinyl.

If you’re an emo like me and you’re a lover of mosh pits, then Crossfaith is the band for you! They combine electronic elements with metal (bear with me), and it’s the sort of thing you don’t expect to like, but it actually works so awesomely – they’re really something else. Dystopia is such a cool song (a banger tbh), and the screaming is on point. The guitars in the bridge are just so cool and dramatic, and overall it’s just a top jam. Jagerbomb and Devil’s Partyare my favourite songs by them.

There are a lot of band repeats in this shuffle which is crazy bc I have so many songs like Jesus Christ. This isn’t my fav/the best Trash Boat song, but I like the lyrics and it’s really well-written as always, and the chorus is powerful. The bridge is also top which is another thing Trash Boat are great at.

15. Teenagers by My Chemical Romance 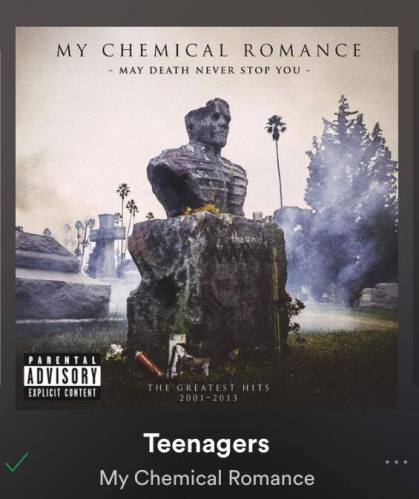 I mean as this has clearly evolved into the #emoexposed tag, it’s only fitting that MCR would make a third and final surprise appearance. Again, it’s not my fav of theirs and it’s one of their more popular songs. But it is a classic, and it’s great for a cheeky emo singalong if you wanna go back to the angsty teen days.

So that was the (#emoexposed) Shuffle The Music Tag! I had a ridiculous amount of fun writing this, and it feels really cool to share some of my music with you bc it’s an important part of my life. I’ve been to a lot of concerts, and I’m tempted to start a cheeky series about my concert anecdotes and deconstructing my concert ticket wall because it’s full to the brim. Let me know if that’s something you’d be interested in reading, as I know this is primarily a beauty blog or whatever, but this was ridiculously fun! It was nice to share this stuff with you in my lil space and stay true to my emo blog name roots.

Let me know if you like any of the songs/bands I mentioned (I’m sure you don’t re kpop, but there’s gotta be some fellow emos out there)!