Hey everyone, I’m coming back at you again with another weekly wrap up! This week was full of sunbathing (sun burning), saying goodbye to Chen’s infamous garage, Wes’ 21st and a lot of friend and family time in general. Keep reading to find out what I got up to! 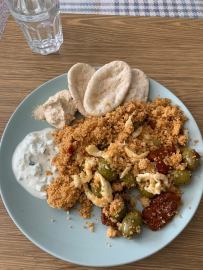 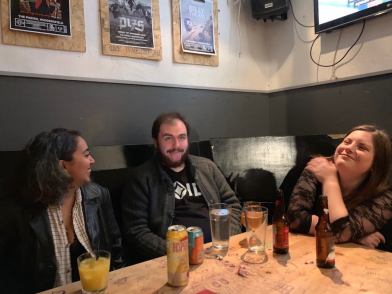 Today I got up and had some much-sought-after hot cross buns for breakfast before getting started on some more decluttering of my room so I could get it out the way (I also find it weirdly enjoyable and cathartic, don’t @ me). After reaching my declutter goal for the day, I made myself a really nice like greek salad thing which was top quality, and then I sat down to watch some youtube for a bit before doing my makeup, tucking into a roast and heading to town to see everyone at the Parish quiz. Not much quizzing was done by our side of the table as we just sort of caught up and chilled. After I while I got a lift back because I was broke af until student loan came in later that week so I couldn’t join them on the night out, but it was really nice to see everyone and I had a great night (as you can see from the photo).

Today I woke up and started off my day by doing some more decluttering before settling down on the sofa to finish off season 2 of Sabrina with a certain furry friend (loveeee, I’m so sad it’s over). I then watched some youtube for a little bit before getting ready, having tea and then heading off to Rory’s for the night. I chilled in the kitchen chatting to him and his brother for a bit and they had tea and I watched game of thrones again with them because they hadn’t seen it. We then chatted to his mum for a bit before going upstairs to watch some Netflix and have a bit of a cosy night before going to bed.

I got up at a reasonable time today because I had the final bit of decluttering to do before taking all my shit to the tip tomorrow so I headed back home to get that done. I came home to a package which I opened after lunch; it was some pamper evening prizes I’d won from a giveaway by one of my fav youtubers/ insta people (@hollife). I was super grateful and excited to give them all a go! After unboxing that, I made a start on my last decluttering space (under my bed lmao), and then suddenly started to feel a bit unwell so I decided to sit and watch some Always Sunny on Netflix and then went to sleep for a bit. After my much-needed (but still not enough) two hour nap, I read for a bit and then we had nachos and fajitas for tea. After tea and a little bit of tv, I headed to bed because I was just so run down (very odd).

Today I got up not feeling ill anymore and, undeterred and excited, I emailed my fav tattoo artist from instagram to see if they could do the tattoo I really wanted for my birthday, and then set off for my haircut. I chatted with the hairdresser while she was going about her business but then it went pretty downhill…

So the first pic is before, the second two are after – I asked for blonde from sort of middle to end like an ombré like I had before so I could dye it, but what ended up happening is that she’d run blonde highlights all the way through. I was so shocked and pretty upset, I’d said I didn’t really love it when the foils came out but she told me to trust her and then I left like aaaaaa. I moped about for a bit despairing because I was shocked and all my birthday stuff was coming up, and then I sorted myself out before my mum went off out with some friends and my dad came home. We did pizzas on our new pizza oven (so tasty) and then me, my dad and Ellis sat out chilling for a bit before Emily came to sleep over. We had some drinks, chatted and played some Mario Kart on her Switch before going to bed. 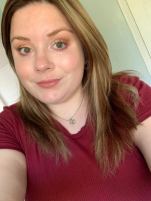 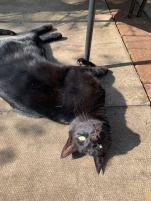 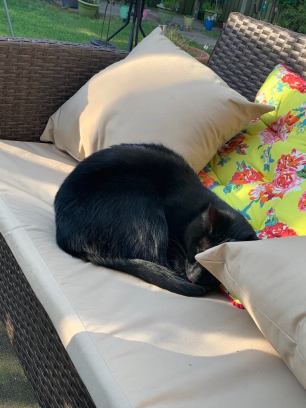 Today I got up reasonably early because Emily had to go walk the dog she was dogsitting but, to be fair, I’m me so I’m physically incapable of sleeping in anyway. I was still super insecure about my hair because it’s such a drastic change and I’d just started actually liking my natural brown hair colour too. Nonetheless my parents were off so we first went to pick up my mum’s new car, dropped the boys off at the station and then me and my mum went to Burger King before shopping for some garden bits and some paint for decorating my room in a few weeks. (I also published a blog post on my glowy base makeup routine, so if you fancy a read I’ll pop that here!)

After that my mum went to go get her nails done and I sat in the garden watching drag race and painting my nails with my new nail polish, and then my mum came home and we sat relaxing in the garden with some prosecco. The boys took ages to come home so we got them to go pick up a takeaway and we all had our fav Indian for tea whilst watching Four Lions before going to bed.

Today I woke up feeling super colourful and whacked out my old Full Spectrum palette (I have a suuuper old review post for it here) to play about with it for the first time in ages; I absolutely loved the final look. I then settled down for a nice relaxing day in the garden, suncream on and book in hand. I ended up finishing The Chalk Man, and I quite enjoyed it despite it being a bit confusing at times (you’ll see it in my April book round up thing later). Then I topped up my makeup and got ready to head to Mirfield for Wes’ 21st.

We watched some videos, drank a little and played some Jackbox on the switch (a party classic), before ordering pizzas. After pizza Hannah came and then me, her and Chen hung out for a bit while the boys played smash and then everyone headed back home/ Wes’ student house, and I went to Rory’s. 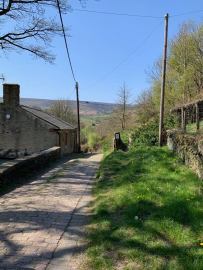 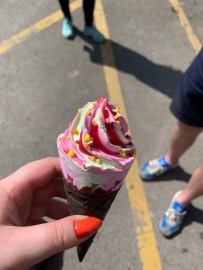 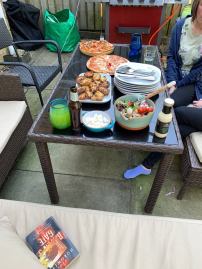 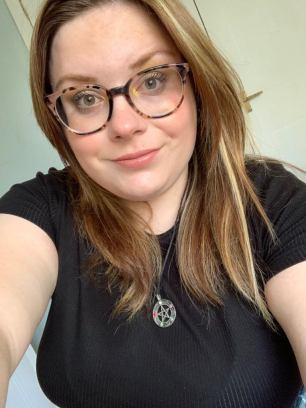 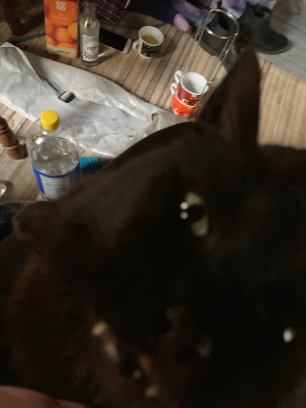 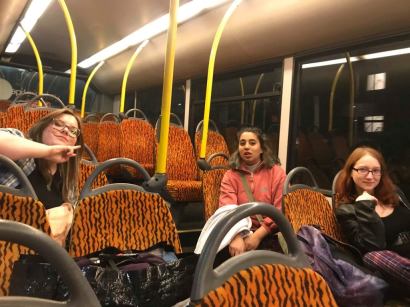 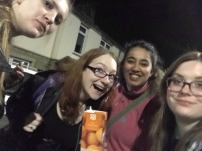 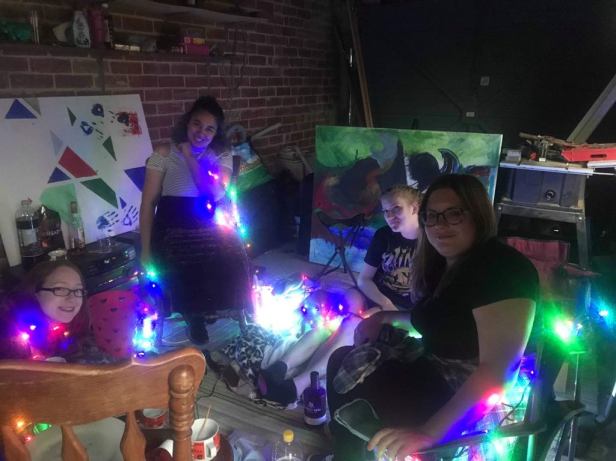 I woke up feeling fresh and I got dressed, did my makeup and headed back in the car with my dad and my auntie and cousin who were visiting. We got back, popped some suncream on and then headed out for a nice Easter Sunday walk (munus Ellis and Nathan because they’re lazy obviously). We walked through the park and saw some super cute ducklings and did a classicwalk in my village before going back and having some pizza, salad and skins for lunch.

After lunch, my auntie and cousin left to go visit my Nan and we sat in the garden for the rest of the afternoon. I finished an entire book (Raven’s Gate) and then got ready to go to Chen’s to have a final night in her iconic garage before they moved. We sat surrounded by christmas lights (and one of Chen’s adorable cats) and recounted college drama and things and even went to the park where many nights have ended up in the past. It was a really fun, classic night that I was super glad we got to do.

Favs of the week:

Eyeshadow of the week: Makeup Revolution Sophx palette (review here if you fancy giving it a look).

Youtube video of the week: Jenna Marbles’ Easter Egg hunt for her dogs because it’s the content we all need

Highlight of the week: Very difficult but probably the garage night or Wes’ 21st

So that was my week wrapped up! I hope you enjoyed reading it as much as I enjoyed my first week being back at home. It was just so nice to be back again and see my friends and also to tidy up my room and get it ready to be decorated. I’ve also been having so much creative fun with my makeup and I’ve been putting a lot of work into looks for my Instagram (@makemeupinsidee if you’re curious). I hope you all had a great week and I look forward to writing next week’s wrap up after my early birthday celebrations! 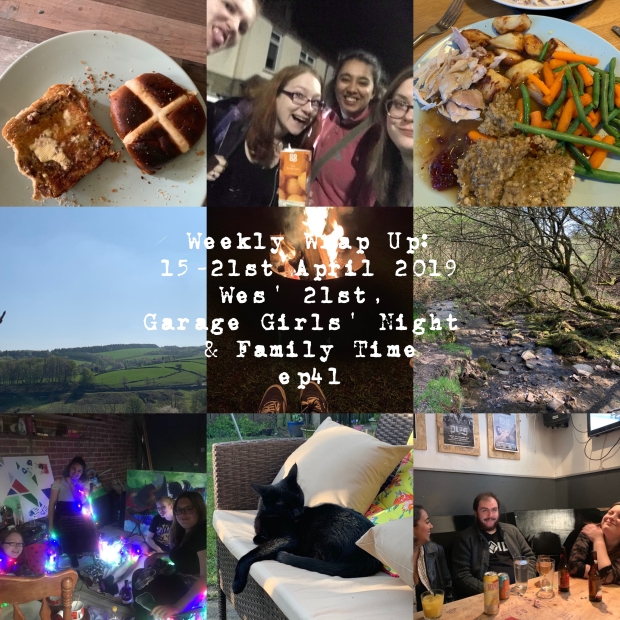